Brenda Lee and Me. 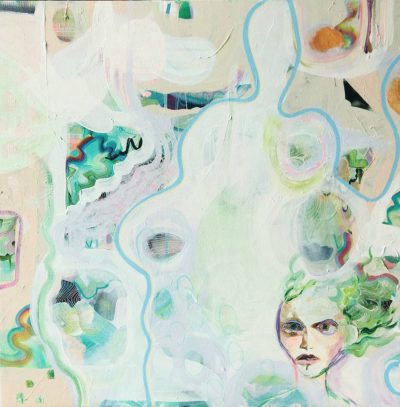 Not Botticelli’s Birth Of Venus Painting by Synnöve Seidman

It’s hard to admit. But I spend most of my time

streaming into my phone on HBO Max.

She’s so bossy and smart with her big red lips

and big breasts under tight tanks in primary colors.

Her looks aren’t important to the team. At first

they hated her and might have joined in jealous

Commander Taylor’s complaint about her arrogance,

instead they all threatened to quit if she got fired.

in every single episode, three quarters in

she gets a faraway look in her eye, and cries out:

The dress! The date! The car!

At that precise moment she sees, beyond the shadow of a doubt

who did it. And it was never the boyfriend, the cousin, the wife

who’d looked so guilty for the first 20 minutes.

No, it was someone likeable who actually

becomes even more likable as they inevitably confess to

Is it her southern sing-song politeness? Her sweater sets

Her sweet smiles, sympathetically, misdirecting them

for trusting the police.

We watch them explain that the guy ruined everything:

planted rat shit in Dad’s restaurant, got a gang to recruit the baseball prodigy,

to the entire church community.

Brenda Lee listens with her head tilted to one side.

the moment they confess.

Leaping from her chair she screams MURDER in their face,

“What, what, what are you saying… Murder?… But

time out for boppin’ Billy on the head

even if he did call them poopyface.

As if life had left them untouched, vulnerable to any

soft spoken woman with kind eyes and smooth skin who

happens along in a police station.

As if they had never, ever watched TV.

every single human in LA, but when her sick cat dies

We see her sweat through t-shirts

due to early menopause.

She pulls them off, breasts rise above her tight, flat abs, we wonder

maybe early menopause is not so bad.

Agent Howard (Fritz) of the FBI,

proposes in the doctor’s office

after hearing the news from a young

Diamond ring in hand, he’s on one knee.

“Deep down your an old-fashioned girl Brenda Lee”

Brenda will never have to juggle priority murders with babies

who always think that they are the priority. She won’t lose those abs,

wake 5 times a night and, find herself forced to choose between

(we know which one would win).

She remains covered with love by her ex-boyfriend boss, her FBI fiancé,

Clay and Willie May, who admit without a moment’s hesitation

that she is their favorite child. She has a purpose. She knows she’s the best.

The big smile and breasts are unimportant.

She has them, but couldn’t care less.

She doesn’t care about me,

but she would care a lot if I got murdered

in a high profile, very bloody, priority kind of way.

She would lie to everybody, my kids, her team, even Chief Pope

if it meant closing the case. She would not stop thinking about me

until she found the murderer,

then she would forget me entirely.

Her work is her deepest attachment to the world.

I wish I could be like that, detached and connected at the same time.

I wish I could believe my art,

the expression of my true self, justified my life.

Brenda Lee has no doubt

she’s a bloody planet worth revolving around.

She doesn’t worry about race, class or gender.

All she needs to know is

nobody wants to get murdered.

She once told a whiny LA gang member

“I may not know your world but I know ballistics!”,

and then proved it wasn’t him

She will join an autopsy with glee, re-enacting it all

on the blood-spattered floor of the morgue.

Imagining herself the vic, waiting for the gleam, because it’s coming

in all its magnificence, the moment when she sees…

I’m so unlike Brenda Lee, maybe that’s why

I like to have her in my pocket, continually streaming in my ears.

Even on my bike I can hear her

through the cords of my old-fashioned apple buds

with that singular flat attachment.

Just like Brenda stays attached to Willie May in Georgia

through a special telephone that Fritz is not allowed

to touch, lest her parents discover that Brenda, 40,

or living alone with only my dog for company.

I lost my abs, got up five times a night and went

to all the birthday parties. Nobody cares about that either.

I’m no brilliant red comet streaming through the sky

No, I walk alone, through Prospect Park with no eyes on me

but the dog. He follows me all around the house too and whines

if I put him in my room, so I can eat dinner in peace.

His devotion reminds me of Fritz,

but Fritz actually turns me on (even through the tiny screen) and my dog,

thank god, does not, though he is the only warm body around.

His love also has limits. When ears perk up I clutch

the leash. Like Brenda Lee, the thought of blood excites him.

I know full well he’d bolt me for a squirrel, cat or rat. 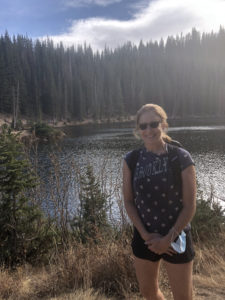 Judy Schneier is a writer and psychotherapist living in Brooklyn. She reads frequently at Brooklyn Poets and is a member of The Sweet Action Poetry Collective. She can often be found walking her dog in Prospect Park.

Synnöve Seidman was born in Toronto, Canada and lives in British Columbia. She had an extensive early education in fine arts and pursued studies in art history and philosophy at the University of Toronto. Her current work is driven by her interest in the restorative power of beauty and how it is perceived. Synnöve’s art has been exhibited at galleries in Toronto and British Columbia. You can find her and buy her work here.