No Forgiveness for the Shaggy.

“It was the first day of summer and I was recently bald.” 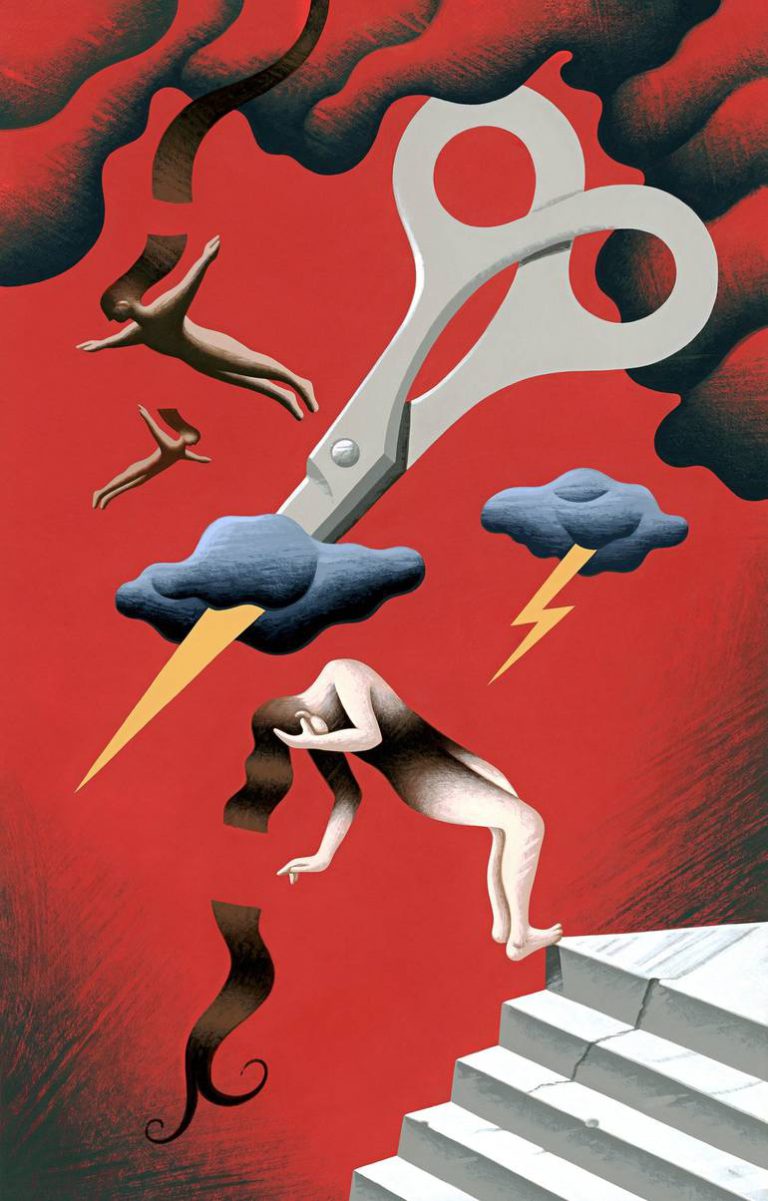 The Judgement Day by Nik Ad.

It was the first day of summer and I was recently bald.

Dad was not a barber but he was a good man with a well-paying job that he hated and a great many warnings about never leaping into law school just because you didn’t know what to do with your English degree and he always called it a “monkey suit” and changed out of it as quickly as possible when coming home from work at 5:30 except for the deposition nights when he stayed in a firm-compensated condo in Dallas or San Antonio or Corpus fucking Christi and he built us an outdoor shower in the backyard next to the unshaded swimming pool that always cooked to an embryonic lukewarm by the late afternoon and I would shower in the plywood dish-soap-smelling thing year-round but I loved it most in winter when I would run shivering from the house and duck into the steaming confines that told me I was more than my surrounding elements or my city or my last name and it was on the nearby patio that he would shave me bald on the first day of summer.

I used to turn blonde with the drying grass. My locks, grown out over the paltry Austin winter, would twine to my bony shoulders. This could not be abided, you understand, as Texas would not allow it. Summer sadism, boiling streets, no forgiveness for the shaggy—like your city, American, but with more lime salted into the heat.

I could always make my sister laugh by spitting her pacifier out of my mouth with a whoomph and a silly face and she would cackle and cackle and sometimes hiccup.

Dad was himself balding beneath the stern insistence of time—several years still before he would grow the beard and lose the weight. I can still barely attempt a mustache.

It was 95 degrees minimum and my elementary school’s hallways were drawn down dull. I still assumed that my teachers went into hibernation during this period; my earnest A’s were starting to fade in the background; I knew nothing else but to succeed, nothing of what was coming, nothing of my ensconcing suburbs and nothing of their bloody implications and people always say something like it was a simpler time at this point in their myopic childhood recollections but that’s just a trick of the eye, a refraction in the biomic swimming pool. I did not yet know how to spell trite or banal. I had not yet aged out of not really having a past and thus not yet fearing a future; was still waiting impatiently to slough myself off, to grow up. I did not yet hate my writing. It was a simpler time.

So Dad took his cheap barbershop buzzer to my even-then-oversized skull and sheared me to the lowest setting in stripes and swathes. Shirtless, both of us, fine blonde trimmings pasting to our beaded skin as Texas looked on; and I guess it was 2005, the year Vince Young should’ve won the Heisman. We still had Rick Perry. My highschool was still a 5A, not a 6A, and of course the Friday night lights were still all-consuming, still casting shadows darker than trauma on a CAT scan. I would still scooter down to the creek beside the cul-de-sac with the mini-mansions to grub for crawdads in the shallow pollution that I could not see so did not believe in. Every year those were the houses with the biggest candy bars and competitively spooky yard decorations and every year I argued with my parents about store-bought Halloween costumes versus handmade ones. Every year I was inevitably too sweaty beneath the mask.

Well I must’ve lost five pounds during each of those buzzing ceremonies and Dad would always joke like wow you’re fast as lightning, even those varsity kids won’t be able to catch you now but they always did anyway and he was such a beautiful liar and I have since been told that the family unit is the source of all disinformation on earth and I believe it, I believe it. He would never have let the truth hurt me.

It was that summer day, and none other, and I was recently bald as I began edging back as far into the yard as I could before sprinting through the bug-clung lawn and hurling my hair-trailing rib-poking frame into the air, the body too small for its head and too lanky for its promise and still with me now, the baggage I can’t seem to shake, but in that moment I was shedding, nearing the top of the arc and shedding, cresting the peak and shedding, becoming, bowling towards madness but how could I have known because in that moment I was a time-lapse long exposure streaking up, up, up, and finally down into the forgiving water, washing myself clean in a Southern baptism that only a home now-sold and since-bulldozed could provide. Bare.

It was a simpler time, but these days I just pay to get it cut. Now I’m bald again, hoping to remember. 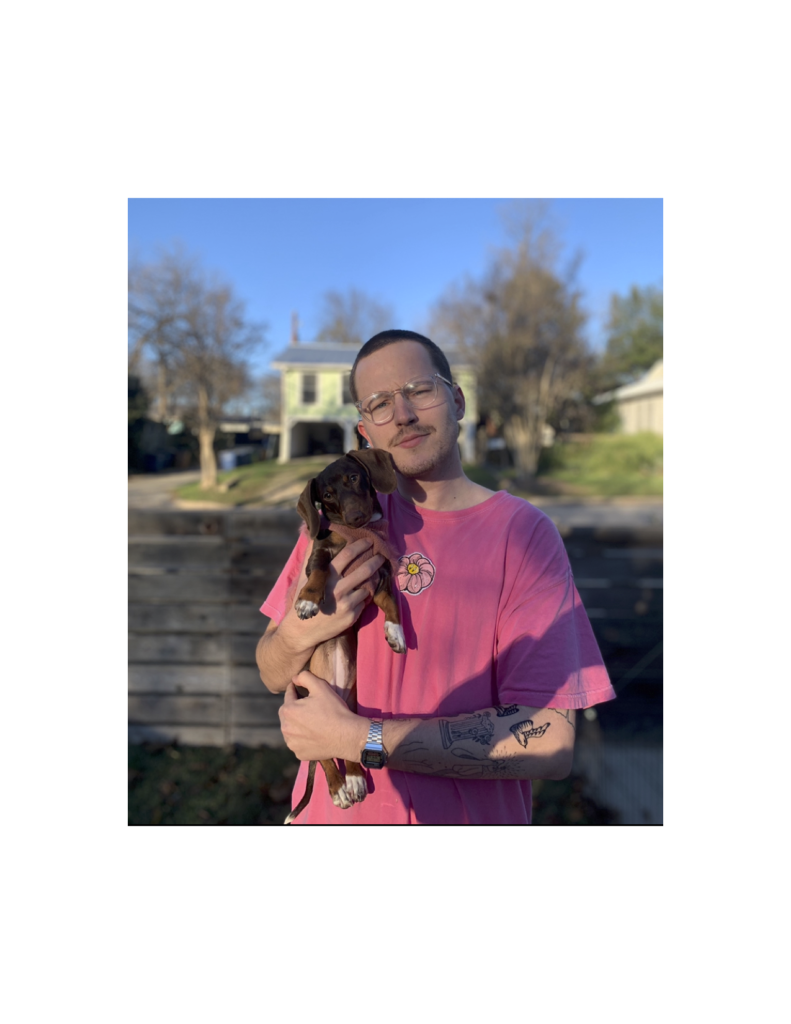 Cade Stone was born in Austin, Texas; took some time coming to grips with that as he worked his way through a pair of liberal arts degrees at the University of Texas down the road; and eventually decided, after graduating into a nascent pandemic, that the credible threat of viral death was palatable compared to moving back in with his parents. He kept his Subaru’s windows rolled up tight as he pushed it east to Washington, DC, where he currently works in communications and writes to survive the fact of that. He has a decent tennis serve and a lousy backhand. He knows more about bananas than you do. He’s thinking about adopting a cat but isn’t sure if he’s ready for that kind of responsibility at this point in his life.

Artwork: Nik Ad is a New York/CT, USA based artist. His concept-driven acrylic paintings have appeared on the covers of Time and Newsweek magazines, as well as in The New York Times, The Wall Street Journal, USA Today, The Washington Post, U.S.News & World Report, Chicago Tribune, The Chronicle of Higher Education, Playboy, Fortune, Rand Review, Lurzer’s Archive, Harvard Business Review and countless others.. You can find more about him here.