your body is a memory in motion.

“When Eason kisses her, Yu Yan closes her eyes and thinks about jumping off a cliff, thinks about the sheets swallowing her up, thinks about anything but the soft press of Eason’s tongue against the inside of her cheek. ” 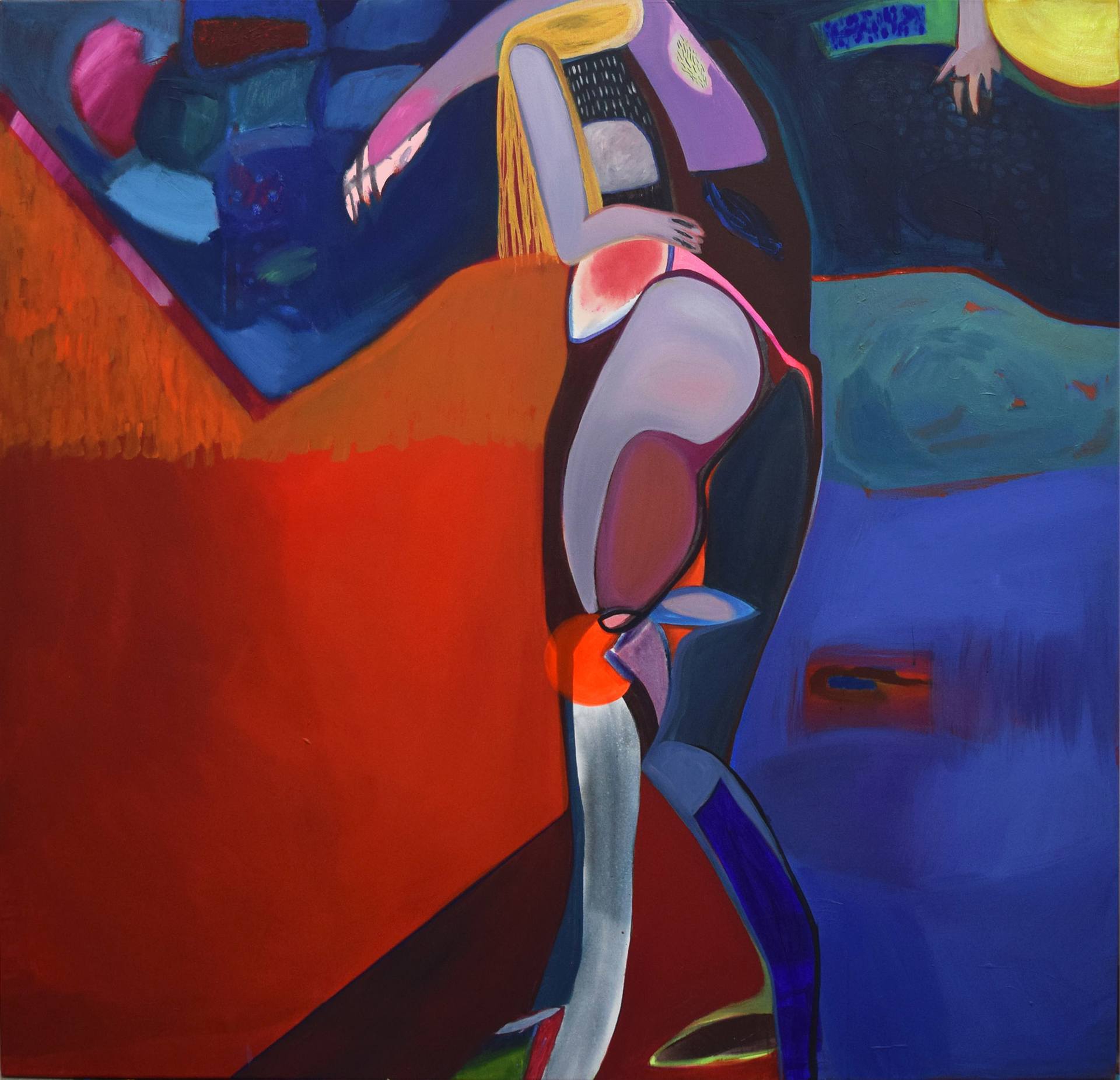 In the middle of nowhere by Agata Żychlińska.

When Eason kisses her, Yu Yan closes her eyes and thinks about jumping off a cliff, thinks about the sheets swallowing her up, thinks about anything but the soft press of Eason’s tongue against the inside of her cheek. Just fuck me and take me and get it over with, she thinks. Just slam me into the kitchen counter, or bend me over in the shower. Just do something with my hair so that I can at least understand.

Instead, she leans into Eason’s arms, feels his hot breath damp on her shoulder, and opens her mouth.

Once, when they were all nineteen, Yu Yan caught Eason kissing Vivian behind the pool shed. It was August. Yu Yan remembers it clearly: Vivian in her lime-green bikini; Vivian in her waterproof mascara; Vivian with her long black hair, her goodnight eyes, her ankles. Eason, staring at them as they sat by the pool. Eason, eyes fixed on Vivian’s big toe. Left foot, big toe. She wonders whether Eason had ever sucked on it while Vivian touched herself.

But Yu Yan isn’t a cruel woman. She’s just curious. She waits patiently, until Eason is holding her, his chest a breastplate against her shoulders. She waits until she can hear the suck of his breath in her ear. She waits, and then she asks.

“Is this what it was like, with her?” Her, as in Vivian. It, as in the memory of that day in August, Eason’s hands buried between Vivian’s lime-green bikini and a fold of pale-pale skin.

Eason doesn’t answer. Yu Yan doesn’t expect him to. She turns to face him, gives him an open-mouthed kiss, then presses her fingers at his temples the way Vivian once did.

She smiles into his forehead. It’s not a no.

Yu Yan starts with the hair. Vivian’s hair was always tangled in something. Yu Yan, help me! she liked to say, with a brush in one hand and a snarled chunk of hair in the other. Yu Yan would work through the knots, one by one, as Vivian colored in her brows.

So, the hair. Yu Yan tries to grow it out naturally at first. Her bangs grow the fastest; within a month, they frame her cheeks, then they’re by her chin. The rest of her hair is stubborn though. After several months, anything past her shoulder just splits.

Yu Yan gets extensions from the salon instead. Her new hair hangs by her waist in a semi-permanent curl. It tangles easily. It’s close, Yu Yan thinks, when she hops off the salon chair. Just close enough.

She spends the first night standing in front of the bathroom mirror, twirling a strand of her new hair around a finger. She spends the second night tugging at a chunk of it, committing the give and pull of her scalp to memory. She spends the third night with both hands tangled in hair under the showerhead and then spends a bruising dawn with a brush in one hand, snarled hair in the other, wishing that someone could help work through her knots.

Everything else is easy. Yu Yan’s aesthetician tells her how lucky she is that freckles are trending, and she throws in the beauty mark that Yu Yan requests for free. For good luck, she says, her hand steady around the tattoo gun as it presses into Yu Yan’s chin. Afterwards, Yu Yan tries to thank her but the woman waves her off. Such a beauty! You’ll be good advertising for me.

Yu Yan supposes she should feel lucky that she and Vivian share the same eyes. Naturally double-lidded – they would do each other’s make-up sometimes. Vivian with her powdery blue eyeshadow. Yu Yan with the thick black eyeliner.

It isn’t until Yu Yan goes in for a nose job that people start to notice.

“What are you doing?” her father asks when they meet up for dim sum. “Your nose is already a good one! Why do you want to cut up your nose?”

Yu Yan chews around the cheong fun and takes care not to bite down on her lower lip. Vivian never bit her lip in frustration.

“A-Ba, I just think it’s time for a change,” she says breezily.

“Did you know that your nose represents the health of your husband?” He aims his chopsticks at her. “You don’t want to cut up your husband, do you?”

Yu Yan swallows and smiles beatifically at her father. A true Vivian smile.

At a certain point, Yu Yan realizes that the surgeries can only do so much. The thought occurs to her in a cab on her way home after the last operation, where a young surgeon had taken on the job without asking questions his older peers had posed: Why do you want to shorten your tongue, Miss? Why such unnecessary risk? Aren’t your parents concerned? Your mouth is perfectly fine.

Yu Yan’s mouth feels foreign to her new tongue in its new shape. She traces the ridges behind her front teeth with this sleek round tongue, no longer pointed, and then tucks it against a molar, the way Vivian would when she was deep in thought.

Vivian. When they were teenagers, they would sneak into her mother’s room and spend afternoons sniffing from candy-colored vials of perfume on a bed too large for their bodies. When they were older, Vivian amassed her own collection. She made a ritual of it — some fragrances meant for the office, others for evenings out, still others for a quiet night in bed.

If you want to leave a lasting impression, Vivian liked to say, you have to spray just a bit on the back of your neck. You’ll leave people with a trail of your scent. A promise. And then she would laugh.

Vivian had liked the strange scents — the carnal, the woodsy, the effervescent. Her favorite fragrances reeked of neroli, fig, and musk — all things that smelled urinous and indolic on Yu Yan but magical on Vivian. Her signature scent even held a tacky note of plaster. Yu Yan loathed it, but she hadn’t minded too much then. Some things weren’t meant to be shared.

If Vivian were in the cab now, she would spin a dizzying description of its smell — It smells like the armpit of a denim jacket left in the sun to marinate, she would say, wrinkling her nose. It’s like something Eason’s ex-girlfriend would wear — dried tobacco and rank patchouli.

It’s a shame, then, that Yu Yan never was able to hone her sense of smell. No surgery can fix that, and for a moment, this fact makes Yu Yan want to cry.

Except that Vivian wouldn’t cry about something as silly as a smell. As ordinary as a nose. Yu Yan takes the most Vivian gulp she can and tries to count backwards. No tears allowed.

When Yu Yan exits the cab and walks a Vivian walk to the door – a clean lope, three steps, green stilettos, size 7.5 – all she can smell is sour body odor and window cleaner.

When Vivian dies, the first thing that Eason says is, I’ll never see her again, in between wet, disgusting sobs. Yu Yan holds him because he sounds lost and pathetic, and isn’t she lost too, without Vivian? Here they are, huddled together in a puke-green waiting room: a lover without a lover, a best friend without a best friend.

Is this where it started?

Later, in the hospital room, the nurses help them gather Vivian’s things. It’s not much: a plain bottle of face wash from the hospital gift shop, a pan of foundation, and travel-sized tubes of hand cream that smell faintly of saffron and vanilla.

Take it, Eason says, shoving the bag of toiletries in Yu Yan’s direction. His eyes, still leaking, brim with eye gunk and tears. She would have wanted you to have it.

That evening, Yu Yan slathers her hands in every bit of hand cream she can squeeze out of the tubes. Her skin takes to the lotion differently though. In the morning, she wakes up with fingers salmon-raw and cracked, oozing vanilla and lymph juice into the bedsheets.

It’s a horrible, disgusting idea, but it works. Eason pushes the thought aside and places his hands on a pair of hips. They’re close. Vivian’s hips were a perfect 36 inches. They had measured it on a lazy Sunday morning – because I’m curious, Vivian had said, then waved her hand and murmured something about Marilyn Monroe’s proportions – and Eason had been more than willing to curve the thin blue strip of the measuring tape around Vivian’s waist, around Vivian’s ass, around Vivian’s hips, until she slapped his hands away and they fell back into bed.

These hips though – they’re not perfect: a little bony, the thighs attached to them a bit too lean. When she turns around, Eason searches for the telltale mole on the chin, the smattering of freckles. The wide double-lid. Everything is in place. This, here, though – these hips aren’t perfect, but they’re close.

She presses against him. Her hands flutter to his shoulders and stroke his jaw. She folds herself onto his lap and cradles his head, buries her face in his hair. Just like she used to, the thought runs through his head, red and streaking, before he slams a door on it.

Yu Yan kisses him with a mouth that’s no longer hers and Eason closes his eyes, yes, he does, he closes them and yes, here – they’re so close –

She hums. Here, in the dark, she is soft, a cavity waiting to be filled. She stretches, thinks to herself, I could be anyone. Some nights, she could even be Yu Yan.

Celeste Chen lives in Washington, DC. Her work has recently appeared or is forthcoming in Maudlin House, perhappened mag, trampset, A Velvet Giant, SmokeLong Quarterly, Tiny Molecules, No Contact, X-R-A-Y, and Shenandoah, among others. Find her on Twitter @celestish_ and online at https://celesteceleste.carrd.co/.

Artwork: Agata Anna Żychlińska is a Polish artist who studied at The Academy of Fine Arts in Gdansk. In 2016 she graduated from The Eugeniusz Geppert Academy of Art and Design in Wrocław. Through her work she wants to talk about universal stories like love, abandonment, hate, suffering, and loneliness using her own individual language. Currently, she lives and works in Wrocław, Poland. You can find her work here.