“I’m going to have a husband and a real baby one day. And, one day, after that one day, when my husband is out of town, I’ll put the kid down at 7, sit in front of the Internet with tap-dancing feet and promise myself the first drink will also be the last drink…” 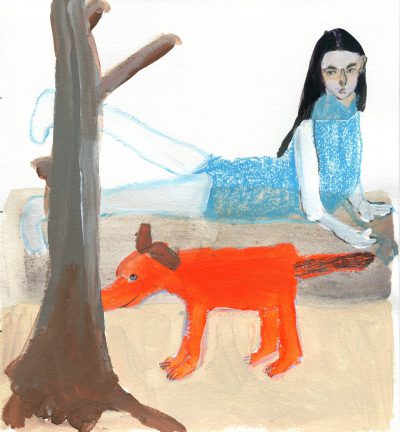 Walking the Dog by Astrid Oudheusden.

Here’s where I look really bad. When I went to the dentist yesterday to get a rotten tooth pulled (Thanks for fronting me the cash, Dad!), the receptionist held her hand over her mouth and asked “Do you need to wipe your feet?” I had stepped in dog shit, probably Milford’s. Didn’t smell a thing.

My dad calls and asks about Milford like this: “How’s your son?” He just became a grandfather. No thanks to me, but to my sister, Margi, who has a six-month-old boy. Finley. Cherub lips. Longest eyelashes. Whatever. But, a month before Margi found out she was pregnant, we were still living together in my apartment on 24th street, waking at noon – and baking, watching The Princess Bride again, taking disco-naps, going out after midnight to Bar 4 or Buttermilk, ending at Jirasol for breakfast at dawn or after to soak up all the booze with carbs and grease. Now, Finley can say ‘Mama’ or ‘Dada’ and I haven’t seen Margi up past-10 in a year-and-a-half. And I have a dog. And I still go out. A lot. And I have one more drink because whoever trained Milford before I adopted him did a good job housebreaking the little guy. And if he has an accident, I say, it’s ok, little guy, my little chi-weenie, my little-tobacco-colored doggie. I’m sorry. I promise to come home earlier. Then, we go out for as long as it takes me to smoke a cigarette. I promise we’ll go out longer tomorrow, little guy. Sorry.

So my dad asks “How’s your son?” I say “He’s my roommate.” The only roommate I’ve ever had who doesn’t mind my dirty socks left under the dining room table or the smell coming from my room as a result of dirty socks, dirty shirts, dirty sheets. He eats through the crotches of my underpants when I’ve been gone for too long. It sounds gross, but we can’t understand a dog’s sense of smell, about a-thousand-times-keener than what we have. Milford has about 50-times the number of nerve cells that register the scent (and taste) of sweat, dead skin cells, blood, mucus, deodorant and detergent that combine to become “me.” Margi told me Milford would circle around the door, wagging his tail for a full 2 minutes before she heard me climb the stairs. Me – it’s the years of smoking that have dulled the olfactory functioning. So there you go, the explanation for the dog shit thing. You don’t need to smell good to take care of a dog.

I could do worse. I’m going to have a husband and a real baby one day. And, one day, after that one day, when my husband is out of town, I’ll put the kid down at 7, sit in front of the Internet with tap-dancing feet and promise myself the first drink will also be the last drink and then take a shower and condition my hair so it’s curly and not nappy and put on the sparkly eyeshadow and wear heels because the bar’s just around the corner and then grab the keys and hear Milford scold me:

-Not even an hour.

-Not even an hour?

Is it in my blood? Is my family cursed?

A week after I got Milford, my father came from Tennessee to visit me in Brooklyn. Milford barked at him. My father told me he and my half-brothers had had a dog when they lived up on Amsterdam Avenue in the late 80s, a border collie with white strands of hair slicing through his fur that made him look like he had been baking. Thus his name, Flour. He sneaked in and out of their fifth-floor apartment, plodding back and forth on the stoop ’til someone came out, or in, if the front door happened to be locked. He followed my father to the deli one day and sat outside while my father bought milk, toilet bowl cleaner and a 100-grand candy bar. He whistled for Flour and took a bite of the candy bar. He whistled again when Flour’s collar didn’t jangle behind him. Nothing. He turned around. A crowd was gathering at the top of 149th Street. In the heat, the asphalt was an idle river that couldn’t carry the dog down to my father’s shameful feet. Flecks of dust sparkled and winked over Flour’s dying body. When he took his last breath, all at once, they collapsed and covered him, clung to him, turning his black fur white, so you’d know he’d be an angel.

“And I wasn’t in the store for five minutes” my father said.

-Not even five minutes?

-Not even five minutes.

Here’s where I look really bad: I went out last night even though Milford hadn’t been walked, even though I had taken prescription painkillers for my tooth. I had one more drink and stumbled home. He jumped up on me and whined and did downward dog, but I couldn’t find his leash. I asked “Can’t you just go in here?” He wouldn’t. Good dog.

I took him down to the patch of grass out front. Off-leash.

Outside, the rain held its breath inside swollen clouds. Pressure. Like Milford, waiting for the right moment. We’ve done this before, he just follows me out and follows me back. He peed. I turned back to the front door. Thunder.

The human isn’t supposed to. You’re supposed to trust the training, plant yourself, call his name and say come.

Jesusfuckingchrist, I ran, watched him run, past our gate, down the sidewalk, down to the corner, 24th and 4th, front and back paws galloping like horse hooves, pushing the concrete behind him. Look at him! Look at his little ears! Little velvet arrows pinned back on his free, happy head.

Part of me made my stomach heavy and my feet slow. The part of me who bites the overdraft fee because she doesn’t want to get off her stoned ass to go to the bank and deposit a check. That part: If he dies, you’ll have more free time now, at least. And maybe another part: Better to get it over with now. He crosses 4th Avenue – 4th Avenue! – where the low-riders don’t wait for the light. I hold my hands out and yell:

Like I’m telling the moment to do something other than what it has planned. I won’t look at the car sliding down the avenue, just at Milford, so much smaller than the street.

It stopped. A cop’s. He put on his flashing lights; they froze Milford. I said “Come.” I carried him back home underneath raindrops, the kind that don’t drop but hang in the air, soaking you from front to back instead of from the top down. I put him in his crate and pleaded “Why? Why did you do that, Milford?”

But he wouldn’t answer.

I slept alone and composed an adoption listing in my head: “Because I’d rather give him up than see him die…”

It’s morning now. Still raining. Still Milford. Still me. I could stand out in this rain for a season and still Milford would scratch the door two minutes before I turn the key. Or I could say that there’s no dam in the world that can stop the flood of Milford’s devotion. I’m stuck.

Look at him now, watching the rain gather in the branches of the trees outside, watching them gather rain and make waterfalls, wagging his tail still, no thanks to me.

Aisha West is an actress and writer. After graduating from the Experimental Theatre at Tisch School of the Arts at New York University, Aisha wrote, directed, and performed plays with Synaesthetic Theatre for ten years. She is currently writing her first novel about a teenage runaway who tries to hide during the age of self-disclosure. She lives in Brooklyn.

Artwork: Astrid Oudheusden is an artist based in Amsterdam. She loves to watch people, listen to them and transform this into painting or drawing. She becomes obsessed with subjects such as portraits, puberty, lonely women, office workers and finds peace in transforming these into her art. You can find her here.