“Forgive this less than subtle case in point, but I didn’t need to have a dick in my mouth to know I was attracted to men. Gay is who I am, not who I do.“ 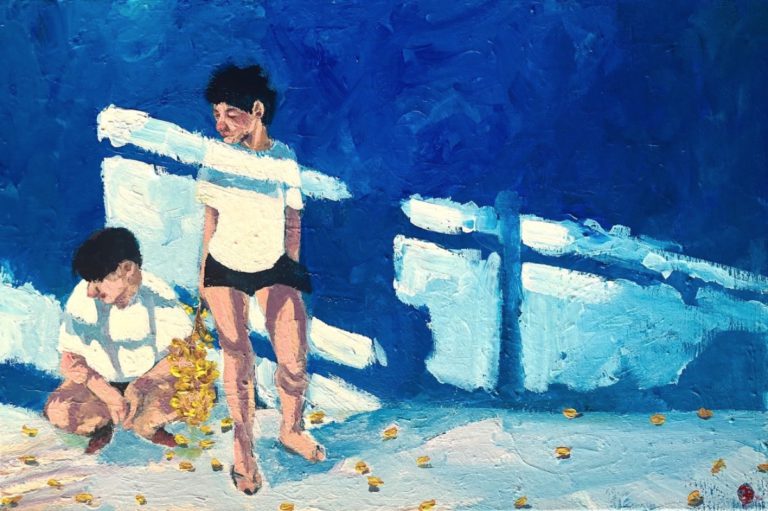 One of the blinders of my youth was not knowing that there are options. It’s not so much that I viewed the world in black and white; I just accepted there was no choice but to follow what was to come. That’s all I knew. I can’t say for sure I’d go back and do things differently. But who wouldn’t wish to have the insight of an adult while living their teenage years?

I hope it’s easier now for a young person to accept being gay than it was when I was facing myself in the 1970’s. Some of my friends experimented, some had secret same-sex relationships, before publicly coming out. That wasn’t my statistic. Of the times I role played with other boys, we never touched each other. The select actions happened before I turned 12. I never allowed myself a gay experience when I was in the closet. And while I’m on this tepid soap box, it has always bothered me when someone asks a young man, “how do you even know you’re gay? Have you been with girls?” Believe me, I knew. Forgive this less than subtle case in point, but I didn’t need to have a dick in my mouth to know I was attracted to men. Gay is who I am, not who I do.

I had sexual encounters with women, usually self-sabotaged, until September of my sophomore year at NYU, when I fell hard for a southern boy named Michael. Even within that private bubble, I convinced myself that as long as we didn’t kiss, I wasn’t gay. The night Michael pressed his lips to mine, after my deer-in-the-headlights breakdown, the catharsis of love eclipsed all fears I had. Though there would be no relationship, I was free from that day on.

Going back further, cusping on seventeen, I had fallen in love with a straight boy in high school growing up in New Jersey. Rick. This is nothing he and his wife don’t know.

There are stories almost everyone can empathize with — no matter your identity — of first crushes and angst, broken hearts and the trauma of unfulfilled teen love so overwhelming at its core, you relate to the desperation of “Romeo and Juliet” — though in my imagination it was “Romeo and Mercutio.”

Rick and I survived my love for him. I think he would even agree that for a short time, it was a possibility, though we never did anything about it. Not even an innocent kiss. Understanding my younger self well now, I can say with certainty I couldn’t have handled anything sexual at that age with another boy or man.

The summer before my senior year in high school, I went away for three weeks on a “Teen Tour.” God help me. When I returned home, Rick was crushing on a new girl he’d met. I wasn’t upset or surprised. Ricky often had girls in the vicinity falling all over him. I may have wanted to spend every waking moment with him, but what I felt was so unconsciously imbedded, I accepted this as our norm. It wouldn’t be too long before the glimmer between us was extinguished. Whatever mutual boy-crush he may have returned was directed back to his natural desire for women. Still I stayed, present in his world, but no longer front and center. When I did come out of the closet, I opened up to our friends but I didn’t tell Rick myself. Maybe in my passive aggression, I was trying to hurt his feelings by leaving him out.

Even with the camaraderie’s rocky suspension, Ricky and I had music in common. We both played guitar, wrote songs and sang. Though I don’t know when or how the friendship took root, we met when we were cast in the Eleventh Grade class production of “Jesus Christ, Superstar.” Ricky was Jesus. I played the cameoed King Herod, flamboyant and outrageous. Wearing cross-strapped, six inch platform sandals loaned to me by my red haired friend, Alice, I danced the Charleston while performing my musical number. I have no recollection of the show. But I can still visualize Rick’s long, blond hair and lanky teen body, shirtless when crucified. That I can remember discussing with his girlfriend during rehearsal.

Around that same time period, while up at a friend’s vacation home on Lake Chautauqua in Upstate, NY, Ricky met a girl while cruising the streets of nearby Jamestown. Val was walking the paths of a strip mall in a halter top and Rick couldn’t take his eyes off of her. He came home having written her a song. 4 decades passed and I can still bring back the tune and some of the lyrics. For a few seasons, they wrote letters back and forth. Then, on a summer morning, without much of a plan, Rick and I took off in my mother’s car for a weekend adventure to visit Val. It had been two years since they’d seen each other.

Now 19, I had completed my first two semesters at college. Ricky was 18. Though still friends, Rick and I weren’t particularly close any more. If someone else in his world had had overnight access to a car, he probably would have preferred not to go with me. I don’t deny that I thought this trip could repair any emotional bridge. For the weekend, it did. We stayed in a roadside motel near Jamestown, with a coffee maker and two beds, side by side. After checking in, we picked up Val and went to a local diner. She and I hit it off right away. It was clear that she adored Rick. Val was a white country girl, petite, cute, blond, but by my eyes, not innocent. I wouldn’t call her sophisticated, but Val had an awareness that matured her beyond chronology. I don’t know if she had been living a hard life, but I think she saw Rick as an escape.

When it came time, Val stayed the night. I’m fairly sure it was something Rick and I had discussed before we hit the road. Val and he took the bed farthest from the front door, but there was no privacy. It could have become raunchy or inhibited or from such a close distance, might have accessed certain sexual fantasies for me. But I was so reverently in love that I slid under the covers, turned to face the front windows and went to sleep. Whatever passion was played, I slept through it.

For Rick, this wasn’t just bedding some girl he had the hots for. On this steamy night in a poor-man’s vintage motel, Rick gave his virginity to Val. I thought he should have that private event without curious, envious eyes. From my perspective, this was a serious marker for Rick, and I didn’t want to intrude. I can’t testify that Rick thought that way or if, like most boys, he expected that I looked on in the dark. Even in his youth, Rick wasn’t your average man. I’d like to think that he knew I’d be respectful. Of all the times for me not to act like a typical teenager…

The next day, Val and I found ourselves alone, talking like old friends might. I thought she had known that Ricky was a virgin. Apparently not. Even as a teen, I understood that for a girl, the loss of virginity weighed substantial, but that didn’t mean Rick took it casually. Val was smugly surprised at Rick’s adeptness. I can’t say whether he was practiced or intuitive, but having waited had been right for him.

On the drive back home, I got stopped for speeding in Horseheads, NY. The highway policeman pulled us over and wrote me up. Rick pretended to be asleep.

In the years that followed, I became very close to Rick’s mother, Pat. She deserves a story unto herself. From the early days, Ricky’s posse of school friends had taken daily residence in Pat’s kitchen. We all adored her. Some called her Mom. When she found out I was gay, Pat wasn’t happy about it and she told me so in the kitchen at a holiday dinner. But she made it clear she loved me in spite of my “lifestyle.” That may not sound like enough to sustain, but I understood. She came from a more provincial time. When she passed away in January of 2002, her daughter, Trice called to give me the heart altering news. “Andy,” she said, “You know how much Mom loved you.”

In 1997, Rick married. He and his wife raised their two sons back in the home town where he and I had met. Theirs is a strong marriage. Our friendship has found a good space, now fused by a contemporary affection, with a well-built history as its foundation.

Most years I’m invited to Rick’s annual Thanksgiving, sisters and sweet potato casserole included. It feels like a privilege; immediately warm and hilarious. Inevitably, some spontaneous, memory-laden conversations erupt, usually after dessert and coffee, over topped-off cocktails and wrapping up leftovers. A sincere depth that’s broached with people you love and trust implicitly. And we’re old enough — I won’t say mature enough — to recognize its beauty and to savor the moments.

Every so often, if our schedules permit, Rick and I grab a drink or dinner in New York City. Recently, at the King Cole Bar in the St. Regis Hotel, he told me that during the high school days, two boys had kissed him. My pupils dilated as I quietly went ballistic. It’s one thing to accept he was with girls but hearing this teenage-era infraction, brought on a delayed, irrational hemorrhage. I find it funny to expose what makes me lose control when the subject of unrequited love re-emerges.

Sometime after I turned 40, Ricky’s niece was preparing for a summer Bat Mitzvah. Her mother, Sharyn (Rick’s oldest sister), threatened that if I didn’t show up, she’d never forgive me. Though Rick’s family was raised Presbyterian, Sharyn had married a Jewish man and converted, bringing up her three children in the faith.

I drove out to the tip of Long Island for the day. Rick, his wife and young sons were staying in a quaint motel, not far from the beach. One room, a coffee maker, two beds, side by side. Rather than driving back to the city that evening, Rick’s wife invited me to stay the night in their room. “I’ll share one bed with the boys,” she offered, “and you and Rick can take the other”. I responded nonchalantly, “20 years too late”.

In addition to drafting more than 100 musical compositions, Andrew has written several short stories (links listed at www.andrewsarewitz.com) as well as scripts for various media. His play, “Madame Andrèe” received an Honorable Mention from both the 2018 Writers Digest Competition, Play/Screenplay Division, and the 2018 New Works of Merit Contest (Loyola University, New Orleans), as well as garnering First Prize from Stage to Screen New Playwrights in San Jose, CA, winning the honor of opening the festival series in August of 2019. Mr. Sarewitz also has authored numerous historical and critical artist essays with a primary focus on twentieth century non-conformist art from Russia.

Nina Zdanovic is originally from Vilnius, Lithuania, and is currently based in Tokyo. Her work reflects her belief that humans don’t live in an objective world, that the reality that surrounds us always reflects what we are going through. She explores how our memories, thoughts, and experiences affect how we perceive reality and searches for the intersection between the real and mystical, between the inner and the outer worlds. You can find her and buy her work at ninazdanovic.com.