“There is no consensus concerning how many species of fungi are in existence. Estimates have ranged between half-a-million and five million. So, there might as well not be an estimate at all. By mid-April, however, I’m able to identify thirty-three species sprouting from Grandad.” 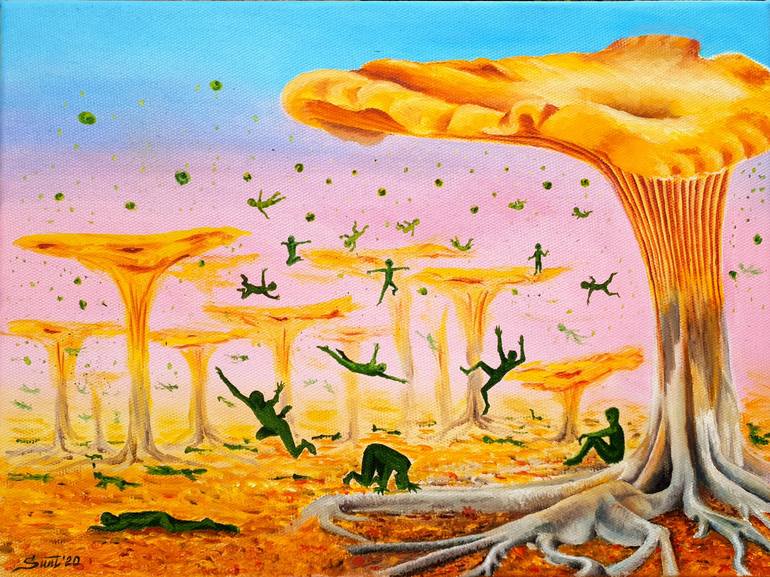 life in a different projection by Suntola Art.

There is no consensus concerning how many species of fungi are in existence. Estimates have ranged between half-a-million and five million. So, there might as well not be an estimate at all. By mid-April, however, I’m able to identify thirty-three species sprouting from Grandad.

They appear slowly at first. Xanthoparmelia, rock-shield lichen; breaching from the age spots clustered along his knuckles and throat. He picks at them and leaves Grandad-colored flakes between the couch cushions.

“Don’t worry yourself over it, dear,” he tells me one day over mahjong, “when you’re as old as me, everything starts falling apart.”

More spores spread. Pale strands of alectoria sarmentosa snake down his arms. Grandad wears long-sleeves. The caps of wispy enokitake poke out from under his pant cuffs. Grandad pulls up his socks. A fairy ring of frail, domed marasmius oreades forms round the crown of his bald head. Grandad wears hats.

At the grocery store, Grandad lingers in the dairy section, scratching the button mushrooms on his chin.

A stray child wanders down the aisle, stops and stares. It tilts its head back and wails.

Fungus fills the crooks of Grandad’s elbows and knees and the man stops bending. He takes up a cane, a walker, and, finally, a wheelchair. I push him to BINGO nights at the community center. The fungi make him heavy.

He frowns and waits.

“Grandad, I got you an appointment with Doc Kerring.”

“She’s got younger and sicker people to worry about.”

He stabs his sheet with his dabber.

Polypores, shelf mushrooms, grow beyond his brows and blind him. Fat boletus edulis overtake his shoulders. Velvety coprinopsis variegata bubble round his waist. When he is still, I see the fungi moving. Barely perceptible, so that I think I’m imagining it every time; the quivering exhalations of the chanterelles and heartbeat-twitches of cheery millers.

When I try to dress him, Grandad doesn’t fit in his clothes. I buy him ponchos and shawls and skirts that he makes me call kilts.

I wheel him round the park by the lake now that it’s warmer. I sit on a bench beside him and hold the huddle of smooth-capped blewits I’ve come to recognize as his left hand.

“The lake’s thawing,” I yell so he can hear me through the morels.

Grandad mumbles through the brittle flaps of wood ears that have replaced his lips.

“Geese are back, Grandad.”

He nods. Or, maybe, he’s fighting to keep his head upright.

A bit of Grandad is released into the wind.

I pat the blewits and stand.

Stevie Billow is a creator and educator based in Cambridge, MA. Their work has previously appeared in Meat for Tea: the Valley Review.

Artwork: Suntola Art studied at a classical art school from 1993 to 1999. Her paintings are in private collections in the USA, UK, Spain, Australia and elsewhere. In her paintings she expresses the emotions and love for the world around her.  You can find her work here.