“From the corner of his eye he noticed a small girl watching him, someone’s daughter or granddaughter or baby sister, not old enough for school but old enough to understand loss.” 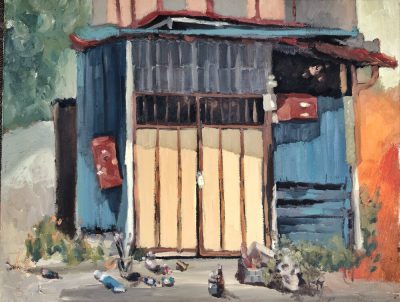 The jobs to be had were seasonal, and the position he wanted was in Paints. The employer was an enormous hangar-shaped construction of corrugated metal you could see from the Interstate. It was a twenty minute bus ride on said Interstate from his basement apartment in Olga’s house, twenty minutes back, more people staring at him. He left the hiring event feeling less than good about his chances.

When he first returned to town, he had come looking for Olga’s husband. “You haven’t heard?” the woman who answered the door said to him. This was Olga. He could see in her eyes that it had happened quick, but that she hadn’t taken it too hard. She caught him looking at the for-rent sign on the door. “It’s a basement,” Olga said. He was in the market for cheap arrangements, no use in lying. She looked at the place where his right arm should have been.

The next day he was moving his blanket and bedsheets and coffee pot into Olga’s basement. Every Sunday since, without fail, she brought him home-made food in a Tupperware container. Sometimes, he took it with him on the bus looking for work, and while eating it – the container squeezed between his thighs – he imagined what Olga looked like naked. It was usually some kind of fragrant stew, meat and potatoes, herbs. Good for the bones. He could feel people on the bus thinking: at least I’m not him.

Two hours earlier, he’d been studying the faces of the other job-seekers at the hiring event. He was surprised how quickly the shame of it had worn off. It was the middle of March, and after a hump-busting winter, home-owners were going to need lots of paint. He wanted to be the man to sell it to them. He had been a house-painter in college. Money he saved to buy his first motorcycle, he said to the hiring manager.

He’d omitted on his resume the movies he’d worked on to avoid having to explain how he’d gone from all that to just this, singing for his supper under a tent in the parking lot, the washing up in his hometown, trying not to stare the locals and their guileless pain in the eye. He was the only one wearing a tie and jacket. He suspected he was the only guy in the whole store who had once made a six figure salary. Definitely the only one who had once rode a Ducati across the Serengeti with Brad Pitt. Damn sure the only one missing an arm.

But getting sore about it wasn’t him. Though he had not slept with a woman since the accident, it had not been for lack of trying, and he’d been staying in range. Olga looked better every time she dropped off food, the reveries adopting a pornographic heat. Occasionally, he tried to loosen her up with an old story from the movie business, but he couldn’t get more than a sheepish grin and some pleasantries out of her. He didn’t push it. In the summer she left him baskets of vegetables from her garden.

He looked over the handwriting on his application – it was getting better, more orderly. His lines were straighter, his loops finished narrower. From the corner of his eye he noticed a small girl watching him, someone’s daughter or granddaughter or baby sister, not old enough for school but old enough to understand loss. Her eyes fixed on the empty sleeve of his jacket.

The interview occurred in three stages. You’re mighty over-qualified for the position, the hiring manager had told him during the first stage. But, he said, the store could put a man of his character to use. He looked seriously at Seth and said the company was friendly to the disabled.

The second stage was a personality evaluation. At a computer desk with dividers to stop you from cheating. The evaluation was proctored by a muscular woman with a lanyard hanging between her freckled cleavage. Your score, she said, was calculated based on whether you agreed or disagreed with a few basic statements.

You get mad at yourself when you make mistakes. He clicked on the dot for strongly disagree.

You look back and feel bad about things you’ve done. Strongly disagree.

It bothers you when you have to obey a lot of rules. Strongly disagree.

Any trouble you have is your own fault. Strongly agree.

Clearly, for twelve dollars an hour, they were expecting you to fall in line, to be reliable and think around excuses. It didn’t seem fair, but nothing was. The answers he picked showed he was a team player, how could they not? In real life, only an idiot would disagree that he had no big worries. What the test wanted to know is whether he could put them aside while on company time, and concentrate fully on helping people with their painting needs.

If he had the job, he thought Olga might have more respect for him, and maybe not be so quick to grin his advances away with her good breeding. He nourished himself on her cooking, and she took his rent money, but they could be more useful to each other. At night he thought of Olga and her husband, Patton – the guy he had come to see last year about some money. Patton was close to his older brother, Jake, when they were kids, and Patton was a person that could have helped him. He wondered if Olga knew that about her dead husband. That he knew people who might want to help an old friend who’d made it all the way to Hollywood and fallen on hard times.

The third stage was a piss test. He hadn’t smoked a joint in years; the funny part was that he’d been relatively clean since the accident. When it was over, the manager told him to wait for a call. You’ll hear from us soon, he said.

Joseph Charles Mollica was born in New York, NY, and raised in Astoria, Queens. He is a high school English teacher, a former newspaper reporter, and a graduate of the MFA program at the New School. His short fiction has appeared or is forthcoming in Waxing and Waning, Passengers Journal, and The Northville Review. He lives with his wife and daughter in Sag Harbor, NY.

Artwork: Nina Zdanovic is originally from Vilnius, Lithuania, and is currently based in Tokyo. Her work reflects her belief that humans don’t live in an objective world, that the reality that surrounds us always reflects what we are going through. She explores how our memories, thoughts, and experiences affect how we perceive reality and searches for the intersection between the real and mystical, between the inner and the outer worlds. You can find her and buy her work at ninazdanovic.com.