“The world was noxious and living in it made one a chronic convalescent.” 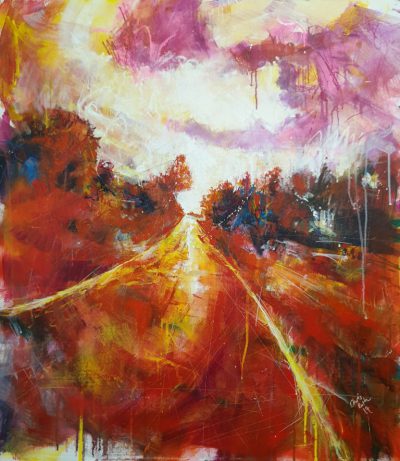 It would be touch and go for sure. The road in front of him looked unpromising, stretching out in a long empty rise of two-lane traffic. But another mile up, by miracle or curse, a backwoods pharmacy, an ersatz cathedral hawking homemade Fentanyl and sugar drinks, taunted him in the distance to the east. Racing now, he made the turn into the parking lot at an unsafe speed. He turned his ignition key off ten yards from the storefront, garishly lit in a fluorescent bath. His tire dust rose in a cloud around its ambient glare. Acid in his esophagus was now jousting with the back of his tongue.

Opening the glass door, he bolted to the first aisle, fearing the worst. As he scanned the shelves for a stomach remedy, his grief was suddenly countered by a moment of absurd humor. Expecting to wretch right on the spot, flooding the dirty white linoleum with last night’s liquor and tainted well water, only laughter came, as he presumed that he would not be the first nor the last to spew some rank gut chowder on the floor of that shithole.

He heard the poor bastard behind the counter get curious. He looked up to catch him peering over an incubator turning ancient hot dogs on greased steel rollers. A soiled mask covered half his face. “Can I help you?” he muffled aloud, hoping not to need the police again. Out there in that rural squalor, the town patrols were as useless as the shabby security camera mounted behind the register. And the beatdown boys took sodas and cigarettes without paying whenever they left.

Might as well reply he thought. No reason to alarm. “I’m good. The help I need you can’t provide.”

Head in hands, he rose from the floor and shred the protective plastic on the antacid potion. He had swallowed half its volume before pulling up his gaiter and placing the bottle on the counter to pay. “This and some of that headache powder behind you.”

The man was not pleased to touch the bottle. A germaphobe in the hot zone, but a capitalist, nonetheless. “Need anything else for the pain? Something stronger? We sell some other stuff. Privately.”

It was a message that required just the right eye contact, and for the first time their glances met. Each was sweating for a different reason. He signaled no.

The next minute could have been an hour. He felt the bismuth coating his throat, keeping his nausea at least momentarily from owning him. His head throbbed and he shook. His entire body seemed toxic. The whole store was lit in a pale flaxen cast, adding to its malignancy. He needed to shit. Scanning the random products that encompassed him he wondered if anyone was ever healthy anymore. Ointments. Tablets. Tinctures touting various and conspicuous claims of benefit. The world was noxious and living in it made one a chronic convalescent.

He grabbed a bouquet of carnations from a bucket of water. They were the saddest thing in the store.

“Just these,” he answered. “And the keys to your toilet.”

Ten minutes later he was on the road, careful not to bottom out in the potholes of the on-ramp to the county highway. He drank down the second half of his medicine and chased it with the last swallow of whiskey remaining in his stainless flask.

Somewhere far from there, across the Hudson, was a place he used to call home. But there was one stop to make first. Over the next hill, in a field of unmarked graves, he somehow had to find her.

A 2010 recipient of the Joan Mitchell Foundation Grant for Painters and Sculptors, Darryl Lauster is an Intermedia artist, writer, and an Associate Chair of the Art and Art History Department at the University of Texas Arlington. His writing has been published by Gulf Coast Magazine, Art Lies Magazine, The Esthetic Apostle, Crack the Spine, The Conversation, Glasstire, The Athenaeum Review, the CAA Art Journal and his first novel, Rites of Passage, was published by Creators Publishing in 2017.

Artwork: Chris Roth is an artist focusing on psychological portrait, visionary landscape, and urban abstraction. Her work vibrates between frenzied memory reconstruction and analytical exploration. You can find out more about her and buy her work at chrisroth.art.