“Connie slips under the opening at the base of the cabinets, glides silently, invisibly,  around the perimeter of the room. She’s got him spinning like a runaway carousel.” 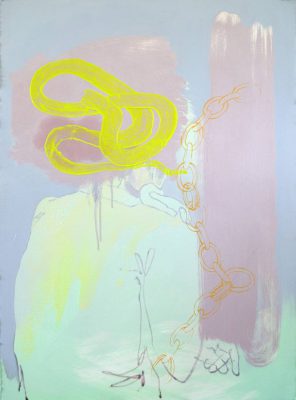 When Connie hears drinking glasses clinking at 7:07 a.m., she groans, rolls over in bed. Clamping her eyelids, she wills the sound to be bird call, the neighborhood recycling truck, this childhood memory: hand crank music box, metal strips pinging imprinted pins on a revolving brass cylinder, plucking that tune about going “a-wandering” on mountain path, knapsack on your back.

At 7:10, more clamor. This time she recalls a fairy tale she read to her young children. The one about a grumpy, red-nosed giant who passes his days eating stinky limburger cheese, counting gold coinage. No fairies with fluttery, iridescent wings anywhere in that one. “Fairy” tales always a misnomer. More fitting: “mayhem.” Her son and daughter were mostly intrigued by the limburger. Have you ever tasted it? How can it smell worse than it tastes?

Clink. Clank. Clunk. 7:14. Incessant racket from the first floor of the traditional colonial finally hails then hauls banshee from her breast. Flings her onto bare feet.

Snatching a wrinkled, flannel shirt from the doorknob, smelling of the half glass of wine she accidentally dumped in her lap last night when she dozed off watching Late Night with Jimmy Fallon, Connie sores down the wind of marble staircase and in the dim light of the day’s dawn, she confronts him.

Her husband in his ogre form rooted in the middle of the kitchen humming the greatest hits of the Bee Gees. His audience, the contents of the kitchen cabinetry they have shared for twenty-nine years, flung wide enough to free the whole flock and yet everyone is present and accounted for, standing at attention. Even so, the glassware rows have all marched closer to their respective edges.

“Howard,” a voice from Connie’s throat emotes raspy and low, the chords of a double bass. A familiar rippling descends her crooked spine, brainstem to tapered tail. A toss of her matted hair and an ebony, forked tongue darts from between parted, pallid lips.

“What the hell?” Howard wheels around to face his half-wife, scaly and lustrous. Her form collapses into coppery, rolling coils.

“Stop this, Connie!” His terror still wide-eyed. He hasn’t made the adjustment, though these moments are nothing new.

Venom pulses Connie’s cheek sacs. Her teeth suddenly large and weighty. Smacking her lips with pleasure, she notices something. She’s getting used to things tasting salty and metallic, like sucking on an iron-rich coin so no one can steal it from her.

“What are you doing for the one millionth time, Howard?’

“Rearranging. You just throw stuff in here. No one can find anything.”

Connie slips under the opening at the base of the cabinets, glides silently, invisibly,  around the perimeter of the room. She’s got him spinning like a runaway carousel.

“What does it matter? Everything has a place to rest. If there is room for everything, why do you care. What changes for the better with height order among mugs and glasses. Why must it be teacups with teacups, juice glasses and juice glasses, flutes with flutes?”

“You are freaking me out!”

“Why do you do this every morning?” She sings or slings her words.

“Because I can’t find anything!”

“Isn’t it more fun to have to go wandering? Search for what you want? I make surprise throb for you every time your body feels thirst, even as mine craves more morning slumber. You are no longer burdened with the knowledge of what to expect at the dawn of your days. And what should hold orange juice or coffee or champagne. Does the vessel decide or the needy? One tiny favor. I’m saying please. Pour coffee hot from the pot into one of those etched, amber glass wine goblets. Tip it back. Guzzle it dry. Just once. Do that for me, and I won’t bite you.”

Connie, his wife, a shimmery, black cable on sandy rose Tuscan tile floor, circling his frame again. How he wishes she was merely the moldy garden hose lassoed outside on deck post. But she is not. One flash of her incisors. One lap of his nectar. The poison she’d leave behind. Howard shudders. Maybe it is the vampire movies she’s been watching with their daughter. No, that can’t be it. For then, this woman would be a bat.

“Do it,” she commands. “I won’t allow you past the light of this one morning. Decide now if you are willing.”

“You’ve gone mad,” his voice thunders down the mountain, trembling the more delicate glass subjects perched on highest shelves. “Who would drink coffee from a wine goblet? Forget it.”

Howard’s chest swells. He soars. Connie knows better than to disobey him, and if she doesn’t, if she’s forgotten how after all these years, she’s going to find out fast. Snake charming is an inherited profession. Passed from one male to the next. His grandfather, his father, now him. It is surprising Connie hasn’t uncovered the family pungi Howard keeps oiled and wrapped on the top shelf of his office closet. Perhaps she has and it didn’t seem like more than a decorated gourd. Something silly, she must have concluded, left over from his fraternity house days. Insignificant.

Matters not now, as everything has finally come to this. With the next dawn, hypnosis, only a less alluring and magical synonym for “charm.” Once the spell is cast, the snake charmer will choose how to protect his safety moving forward. Traditional methods: Remove her fangs. Drain her venom glands. Or stitch her mouth closed, leaving just enough room for that slimy, Satanic tongue to slip in and out. 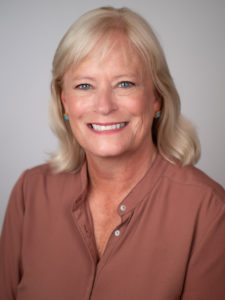 Virginia Watts is the author of poetry and stories found in Illuminations, The Florida Review, The Blue Mountain Review, The Moon City Review, Permafrost Magazine, Palooka Magazine, Streetlight Magazine, Sky Island Journal among others. Winner of the 2019 Florida Review Meek Award in nonfiction and nominee for Best of the Net 2019 Nonfiction, her poetry chapbooks “The Werewolves of Elk Creek” and “Shot Full of Holes” are upcoming for publication by The Moonstone Press.

Artwork: Kristina Rose Baker is an artist working in Costa Mesa, California. She creates figurative paintings that explore mental processes through metaphor, addressing themes of vulnerability, intimacy, and violence. You can find her and buy her work here.