and the world is reaching behind you.

“Just fog now, just fade now: Nothing but landscape being sucked into a vacuum of its own reverse momentum”

-and the world is reaching behind you. And the camp is getting further, farther away. And you’re making the gas pedal kiss the car-floor while bloodied Sherry twists around to watch it all melt into smoke. You think maybe life is like this; cycles of violence and evacuation, only more debris and less movement each time. You think maybe you’ve both been stillborn from it and (cold and bloody) you’ll carry this lifelessness with you for the rest of yours. You just might. If He doesn’t catch up. But you’ve been killed before, anyway, haven’t you? Wasn’t that Esther’s brand of pseudo-Buddhism, the one she tried to work into you before-

You think of that adaptation of Halloween and of Scout Taylor Compton’s weepy reading of a similar line, originally said by Jamie Lee Curtis, which was lifted from Debra Hill and John Carpenter’s screenplay by Rob Zombie. A picture of a picture’s picture. All stories are several-lifetimes-diluted from the teller by the time they reach the ears of the audience.

“Yes.” Unless He has a car too, but don’t give the idea power in voice. Just let it pass and look behind you for headlights. Just fog now, just fade now: Nothing but landscape being sucked into a vacuum of its own reverse momentum. The world leaving and vanishing into its own air. The snake eating itself. Melville’s Shark Massacre.

And in the fast-illuminated landscape of this dark night, you notice the cool forebearers of Autumncoming. How quickly, too. It feels as though you’d just hurtled through Spring’s thaw into summer. Probably you’d been too distracted at Camp to notice: First with Zael’s gentle eyes and then with Him, the boogeyman incarnated one too many times. (And where was Zael now; strewn out somewhere or hidden safe? Can’t linger on that thought, no, not until you reach the hospital.) The leaves browning now, a darkening fire.

Two twinkly lights appear behind you; Seraphim eyes winking in the cold night. You can’t go any faster, not on this mountain road, but better glance in the mirror to see if the gun’s still in the backseat. It is. So is Kieran (or was it Kellen?) the faye Irish boy with the newly-missing hand. You figure you have twenty minutes to make it before he’s gone, and maybe forty for Sherry. There are two bullets left in the gun.

You glance at Sherry’s pale face. She’s still painted up with rouge and lipstain from the dance. You both are. You’d hated her, her nervous rambling. Now, you think, maybe it’s love that brought you both together and maybe it’s her pretty stories that’ll save you both from death. It’s freezing. It’s begun to snow. Your lips are dry, unkissed, and those lights behind you are approaching as if to pass. Tell me a story.

And in the mirrored-halogen light of His eyes, you round the road’s curve and press on into her dark, this night, the misty wish of a prayer beginning to form on your thin lips. 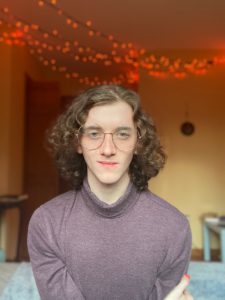 Samir Hamaiel is a Visual Artist based in Brisbane, Australia. His architectural background, studying and practicing in the UK, The Netherlands, Hong Kong and Australia, has clearly influenced his visual approach with strong highly structured perspectives.Samir was named as one of 9 shortlisted finalists in the 2019 Macquarie Group Emerging Artist Prize, based in Sydney.You can find more about him and buy his work here.